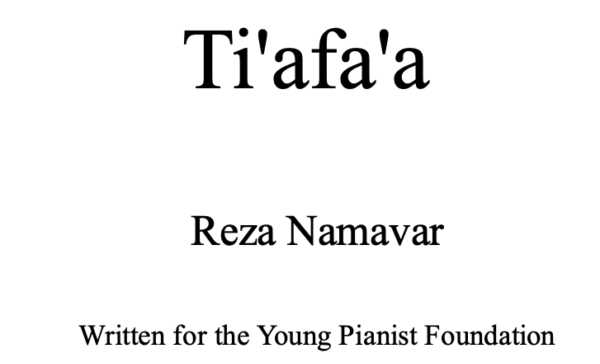 The work composed by the Dutch composer Reza Namavar (1980) especially for the final of the YPF European Piano Competition – Grand Prix Youri Egorov 2022 has been published! The work named Ti’afa’a can be viewed and downloaded here and will have its world premiere during the final of the competition on Sunday February 20th, 2022.

Reza Namavar started composing at a young age. By the time he was 15 he had already written two orchestral pieces and was admitted to Daan Manneke’s Young Talent Class at the Conservatory of Amsterdam. He then also studied piano with Marjes Benoist. Reza continued his studies at the Royal Conservatory in The Hague with Gilius van Bergeijk and Martijn Padding.

Reza Namavar has written many compositions and received the Willem Breuker Prize in 2017. This prize is awarded to a composer or performing musician who has made an exceptional and stimulating contribution to composed or improvised music.